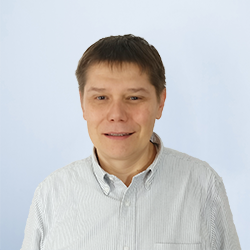 Nicolas Stolbowsky is a lead developer and is responsible for the software architecture at StratX ExL. As a member of the R&D team, Nicolas defines the technical stack, structural parts of the software system, good practice and contributes to the development of the StratX ExL product line.

With a wealth of experience, his career began as a software developer, making graphical user interface for petroleum research. Later, Nicolas progressed to developing GUI and network communication systems for the consulting group ALTEN, to then contributing to and leading the development of multiple professional printing systems for Canon where he contributed to the release of several successful products.

Nicolas brings not only his experience building simple architecture and design for complex systems, but also his passion in trending technologies to the R&D team. His colleagues would describe him as calm, pragmatic and level-headed, which is greatly appreciated in a high-pressured team.

Outside of work, Nicolas enjoys the theatre, traveling and music – so much so that he manages his own music forum.

One fact that you don’t often hear these days, even though Nicolas is heavily connected to the internet with social media, he is almost invisible on the net.